This sweet and tangy, homemade low FODMAP BBQ Sauce will rock your world! Ideal for pork, chicken, or beef, this homemade barbecue sauce recipe is Paleo and refined sugar-free in addition to being low FODMAP. It's great for weeknight dinners, game night parties, and summer barbecues.

Why make your own BBQ sauce?

I love the taste of many commercially-produced BBQ sauces; however, commercially-produced sauces that are both low FODMAP and Paleo are few and far between. I actually don't know of any that are both low FODMAP and Paleo; only one or the other. Fody Foods makes a low FODMAP BBQ sauce I have yet to try that contains sugar; Primal Kitchen makes a Paleo and Whole30 complaint BBQ sauce that's okay but contains garlic and onion powder.

The creation process started a long time ago and required more tests than usual. I even walked away from it at one point and took a break as I was getting very frustrated. Making a low FODMAP BBQ sauce that went well with pulled pork was my number one priority, yet every time I tested the sauce recipe on pulled pork, it just wasn't getting anywhere. Long ago, I fell in love with pulled pork while living in Cincinnati, OH. Cincinnati has a long history with pork that I discuss a bit with my Low FODMAP Instant Pot Pulled Pork recipe.

When developing this BBQ sauce recipe, I studied the ingredients in Sweet Baby Ray's, wondering what makes it so yummy. Pineapple juice was listed as an ingredient, and this intrigued me. I had a base recipe going, and adding the pineapple juice made it about 1,000 times better. The pineapple juice added sweetness as well as tanginess and helped in creating more depth of flavor.

The next ingredient in Sweet Baby Ray's I paid attention to was high-fructose corn syrup, which is definitely not a Paleo ingredient. How I could create sweetness that would stand up to corn syrup using Paleo compliant, low FODMAP sweeteners? My first go-to Paleo, low FODMAP sweetener is pure maple syrup (also known in our house as "Canada;" read more about this in my Low FODMAP Instant Pot Chili con Canada recipe). I added a few tablespoons of that, and it did improve the flavor, but not quite enough.

Long story short, sweet, homemade BBQ sauces typically contain a lot (a LOT) of sweetener, usually brown refined sugar. I ended up having to add ¾ cup of maple syrup before it was sweet enough for my taste.

This low FODMAP barbecue sauce doesn't really taste like Sweet Baby Ray's. Yet, as it was largely inspired by it, I told my husband, Jeff, I wanted to name it "Sweet Baby Ethan's BBQ Sauce" after our 3-year-old son.

Nothing fancy required! The equipment I use to make this low FODMAP BBQ sauce recipe includes:

I've already mentioned a few key ingredients, but here's a rundown of the ingredients I use in this recipe:

A lot of homemade BBQ sauce recipes call for tomato sauce, but many commercially-produced tomato sauces contain garlic and/or onion of some sort. Strained tomatoes are similar to tomato sauce but a little thicker and contain only two ingredients: tomatoes and salt. In the Okanagan Valley of BC, they are available at almost every grocery store, typically located in the same area as tomato sauce. They come in a glass bottle and are the perfect texture for BBQ sauce.

I also add 2 tablespoons of tomato paste to thicken the sauce a bit more and add more acidity.

To add the vital sweetness to this BBQ sauce, I add ¾ cup of pure maple syrup ("Canada") to the sauce. The ½ cup of pineapple juice also adds sweetness as well as the awesome tanginess. More tanginess comes from ¼ cup of apple cider vinegar.

¼ cup of coconut aminos, a gluten and soy free soy sauce substitute, and 2 tablespoons of garlic-infused olive oil, add some umami flavor to the sauce. I add some smokiness with some smoked paprika, but don't add too much as the more you add, the more savory the sauce becomes.

I round out the seasonings with dry mustard (sometimes referred to as ground mustard or mustard powder), an ingredient that can typically be found in the spices section of your grocery store; salt, pepper and cayenne.

My original BBQ sauce recipe, while good, didn't taste as smoky as I would have liked. I've since been researching and experimenting with including liquid smoke as an optional ingredient. Liquid smoke hasn't yet been tested by Monash University for FODMAPs, but the brand I use only contains water and hickory smoke concentrate, which is a natural byproduct of burning wood. Some other brands contain ingredients like molasses that can up the FODMAP content, although to what extent, I'm not sure - it may still be considered a tolerable amount.

Liquid smoke can be found at some major grocery stores in the same isle as the barbecue sauce, although here in BC, I had a hard time finding a brand with just smoke and water and ended up ordering one on Amazon. I ordered Try Me Sauce Hickory Liquid Smoke, which seems to work well. Wright's Liquid Smoke, which I have not tried, also only contains water and natural hickory smoke concentrate and seems to be a common and economical brand in the US.

Cooling, Storage, and Other Items

To make the low FODMAP BBQ sauce recipe, just whisk everything in a medium saucepan and set over medium high heat until the sauce achieves a slow boil. Then, reduce the heat to low and let simmer for 20 minutes, whisking occasionally, until the sauce thickens.

Once it's thick enough, remove the BBQ sauce from heat and allow to cool for 10-15 minutes before adding it to meat. Allow to come to room temperature before refrigerating. Store in an air-tight container (such as a glass jar) in the fridge for 7-10 days. Make it a day in advance of whatever meat you're cooking to achieve even better flavor!

This sweet and tangy low FODMAP BBQ sauce is easy to make and great for weeknight dinners, game night appetizers, and summer barbecues. It's also Paleo compliant and refined sugar-free. Make it a day in advance to achieve even better flavor! 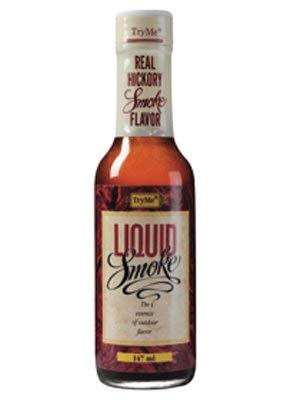