Whip up a quick and healthy snack or appetizer with this Low FODMAP Instant Pot Baba Ganoush (Eggplant Dip) recipe! Similar to hummus in flavor but not in FODMAPs, baba ganoush (also sometimes written as baba ghanouj or baba ghanoush) is a Levantine roasted eggplant dip typically served as an appetizer. Traditionally made by roasting the eggplant on a grill or in the oven, making this baba ganoush in the Instant Pot saves gobs of time and effort. It's also low FODMAP, Paleo, and Whole30 compliant.

This Instant Pot Baba Ganoush recipe is dedicated to my dear friend, Carrie, whose amazing friendship story I will share in this post.

What is Baba Ganoush?

As mentioned above, baba ganoush is a Levantine eggplant dip traditionally made by roasting an eggplant on the grill or in the oven. This is to give the dip a smoky flavor. The eggplant is typically roasted in its skin until well charred, taking about 40 minutes in the oven. Then, you scrape off the skin and mash the eggplant together with tahini, lemon juice, and other spices.

When I first started researching how to make this dip, roasting it in the oven for 40 minutes seemed like a long time to wait, especially for an appetizer. Plus, scraping the skin off the eggplant sounded a bit messy.

While I haven't actually tried making it using more traditional methods, I wondered if it could be more easily and quickly made by using the Instant Pot.

In fact, it can, but there are some also some disadvantages to making baba ganoush in the Instant Pot. I don't believe I achieved the same level of smokiness as I would cooking the eggplant on the grill or in the oven. This could be helped by adding liquid smoke, but I didn't do this as I was satisfied with the way it tasted as is, which is incredibly yummy. I add a smidge of smoked paprika, and this gives my Instant Pot version a bit of a smokiness boost.

If you are wanting more smoky flavor for your low FODMAP baba ganoush, I recommend either adding some liquid smoke or making it using traditional methods. My Instant Pot method is considerably faster than traditional methods and most likely a lot less work.

What does low FODMAP baba ganoush have to do with my friend, Carrie?

As you may have read in my previous blog, Instagram or Facebook posts, my dad passed away over the summer. This was difficult for me on many levels, but one factor that made things super complicated was living 2,500 miles away from my family in Michigan, including my dad. Generally speaking, going to Michigan to visit family is quite the journey, and much more so during the pandemic when there are higher restrictions and fewer flight options.

I have friends and family who stepped up for me in a very real way when my dad passed away. They went above and beyond in helping me face some of my life's biggest challenges.

Although I've thanked them profusely from the bottom of my heart and have given them gifts and thank you notes, I feel as though these things do not even begin to pay them back for their help.

While my artistic talents fail me when painting, sculpting, or songwriting, creating recipes and cooking food with love is my art. Therefore, I will be writing and dedicating recipes to the friends and family members who helped me when I needed it most.

In brief, Carrie and I met in 2004 when we were both teaching English in Austria on a Fulbright. Since then, even though we have lived many miles and even oceans apart at times, we have stayed in touch over the years, and she has remained one of my closest friends. We often go several years without seeing each other, but when we finally do, it's like we never were apart.

When my dad passed away, I needed to go to Michigan. My husband, Jeff, couldn't go due to work obligations. Upon hearing this, Carrie offered to drive 8 hours one-way, during a pandemic, to be with me in Michigan for a week while I tried to settle his affairs and make sense of the situation.

From driving me everywhere I needed to go to cleaning out my dad's refrigerator to attending meetings with attorneys and making phone calls, Carrie did anything and everything she could to help me during one of my life's scariest nightmares. My dad's death was a lot for me to process, and she listened. She was there for every tear, every obstacle, every heartbreaking, scary moment. It wasn't a fun week for either of us, but her presence meant EVERYTHING to me.

Carrie also brought a car full of snacks. One of these snacks was store-bought baba ganoush. She offered me some, and it looked really good, but as I didn't want to take the time to analyze the label and determine whether my stomach could tolerate it, I graciously declined.

Although it fulfills my own unique dietary needs, I created and now dedicate this low FODMAP baba ganoush recipe to Carrie. Hopefully we can eat it together someday without either one of us having to worry about whether our stomach can tolerate it.

Eggplant, Where have you been all my life?

Although I've had eggplant in the past and have cooked it a few times, until making this recipe, I never realized how tasty it can be. In the first part of my low FODMAP baba ganoush recipe, I sear the eggplant in garlic-infused olive oil using the Instant Pot's sauté function, and it makes the whole house smell AMAZING. It made me wonder how I've been living my life up until now without eating much eggplant. And, most importantly (not really): it's purple, which is my favorite color.

Fun fact: although eggplant is commonly cooked and thought of as a vegetable, did you know that it's actually a fruit?!?! Botanically, apparently it is considered a berry.

Due to its nutrient content, eating eggplant can also lead to a variety of health benefits. These benefits range from improving memory to reducing osteopetrosis, and much more.

Needless to say, prepare to see more eggplant recipes on the blog, because I'm in love with this thing. Subscribe to receive notifications of new recipes as they hit the blog!

The equipment I use to make this Low FODMAP Baba Ganoush in the Instant Pot includes:

This Low FODMAP Instant Pot Baba Ganoush only has 5 main ingredients plus seasonings and optional garnish. The instructions in the recipe card may look long, but the process is way easier than it appears.

The star of the show is a large eggplant that weighs about 1 pound (16 ounces) before it's peeled and the bottom and top chopped off. Once it's peeled, etc., it will weigh about 12 ounces.

To start, I peel the eggplant using a vegetable peeler and then chop the bottom and top off with a chopping knife. Then, I chop the eggplant lengthwise into 1-inch by ½-inch strips (more or less, it doesn't have to be perfect) and then chop those strips in half horizontally. I wish I would have taken some process shots of this and may in the future, but if you need additional clarification, feel free to contact me.

Once done chopping, I hit the "Sauté" button on the Instant Pot and add 2 tablespoons of the garlic-infused olive oil. While the Instant Pot is heating up, I sprinkle the two largest sides of eggplant with sea salt. These are the sides you will sear in the Instant Pot.

Eggplant absorbs oil like crazy, so the salt should slow down this absorption a bit. This cuts down on the amount of oil needed and also helps to season the overall dish.

Once the Instant Pot display reads "Hot," ensure the oil is evenly coating the bottom of the inner pot (and if not, swirl the oil to coat). Add half of the eggplant strips and sear on one side for 3 minutes without disturbing. Remove strips to a plate for a second, add 1 more tablespoon of oil and swirl the pot to coat. Add the strips back to the pot and sear the opposite side for 3 minutes. Remove to a plate. Repeat these same steps for the second half of the eggplant strips, adding 1 tablespoon of oil between batches and flips. Once you're done searing, you should have ½ tablespoon of oil remaining. Set that aside for later.

If your eggplant is sticking to the point of ripping apart, add more oil to the pot. Some minor sticking will occur, and that's okay.

Once all of the eggplant strips have been seared, hit "Cancel" on the Instant Pot. Add 1 cup of cold water, wait about 15 seconds, and scrape the bottom of the pot clean with a plastic spoon.

Place the eggplant on the trivet or steamer basket, close the lid, set the pressure release valve to "Sealing," press the "Manual" or "Pressure Cook" button, and set the timer for 2 minutes.

Once the cooking cycle has completed, quick release the pressure. Remove the eggplant to a colander and set in the sink for a few minutes to drain and cool.

Add the eggplant to a large mixing bowl and mash with a potato masher until smooth. Add tahini, lemon juice, ½ teaspoon salt and ⅛ teaspoon smoked paprika to the bowl and mix until well combined. Transfer to a serving bowl using a spatula and serve.

Baba ganoush is typically served with toasted pita bread or pita chips, neither of which I have found low FODMAP versions of. Some low FODMAP options you can eat with your baba ganoush include:

This Low FODMAP Instant Pot Baba Ganoush is a quick and easy take on Lebanese roasted eggplant dip, a delicious, healthy appetizer or snack. This recipe is also Paleo and Whole30 compliant. 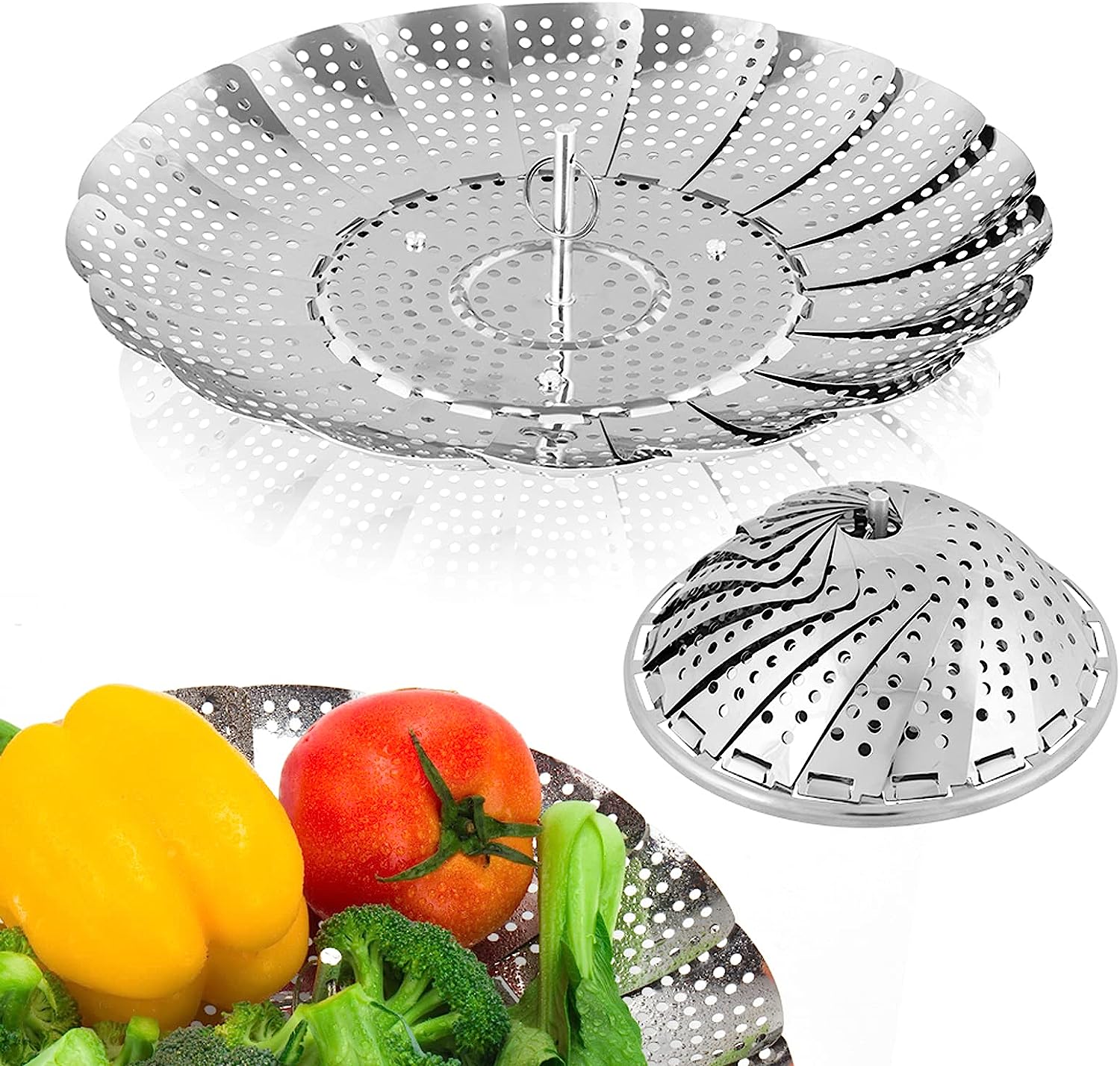 This low FODMAP baba ganoush recipe is dedicated to my dear friend, Carrie. For more details that will hit you right in the feels, read the post above.